Centre for the Study of Human Rights

How to teach ... human rights 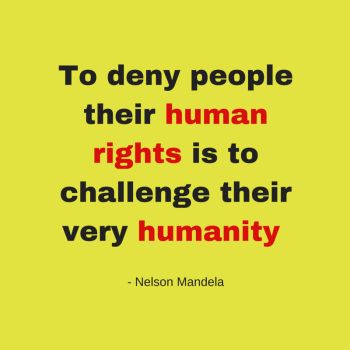 A human rights culture attempts to define principles for the positive conduct of all human behaviour. What follows are issues involved in realizing these principles. Although only a few activities are described for each issue, they should provide teachers with a start for developing their own activities. As some of these issues may prove to be controversial, the teacher’s sensitivity and discretion are required.

Teachers who want to concentrate on specific issues (e.g. peace and disarmament, world development, prisoners of conscience, minority peoples, anti-racism or antisexism) should present them in a human rights context. Students will then be able to see that what they discuss is only one aspect of a larger framework involving many other issues. This general understanding will provide breadth while the specific issue will provide depth. Teachers who specialize in different aspects of human rights should work side by side to provide understanding in depth.

Protecting life - the individual in society

To establish a clear sense of humanity as a composite of individuals, the teacher can explore with students the concept of what being “human” means. This is a more sophisticated form of the activities on confidence and respect. Human beings are social creatures; we have individual personalities, but we learn most things

by living with others. Hence work about the individual is work about society too.

(a) Being a human being

Place a convenient object (e.g. an inverted wastepaper bin) before the class. Suggest that it is a visitor from another part of the universe. This visitor is curious to learn about the beings who call themselves “human”. Ask for suggestions that might help the visitor identify us as “human beings”.

• How is that different from just being alive or “surviving”? (UDHR article 1; CRC article 1)

(b) Message in a bottle

Ask students to imagine that signals have been received from outer space. The United Nations is going to send information about human beings in a special ship. It is the students’ job to choose what to send (e.g. music, models of people, clothing, literature, religious objects). Brainstorm possibilities as a class, or set the activity as an individual or small group project.

The questions at issue here – “What am I?”, “Who are we?” – are profound. The activities above should provide an opportunity for students to begin to establish a sense of themselves as human beings and an understanding of human dignity. This is crucial if they are ever to see themselves as human agents, with a responsibility to humanity in all its many and varied forms. Defining what is human in general helps us to see what might be inhuman. (UDHR article 1; CRC article 1)

Human beings within societies are of the highest complexity. At the teacher’s discretion, the class can look at the right to be alive as argued for at each end of an individual’s life:

• Could it ever be taken away?

(d) “A journalist has disappeared!”

You are a journalist. You wrote a story in your newspaper that made someone in a high position angry. The next day unidentified people broke into your home and took you away. You were beaten and put in a room alone. No one knows where you are. No one has offered to do anything.

You have been there for months.

This journalist has been deprived of a number of basic rights. Using the Universal Declaration, ask the class to determine which specific articles have been violated. Ask each student to draft a letter to the Minister of Justice concerned, mentioning these rights, or an open letter to the journalist. Who else could be of assistance in this case (introducing students to the role of civil society’s organizations)? (UDHR articles 3, 5, 8, 9, 11, 12)

Look through the Convention on the Rights of the Child and list all the articles that offer protection to children and the circumstances and specific forms of abuse and exploitation that these articles mention.

• Are some children more vulnerable and in need of protection than others?

• According to the Convention, who has the responsibility for protecting children?

• Does the Convention give any order of priority for this responsibility?

• What happens when those responsible for protecting children fail to do so?

Research child protection in your community, using the list generated at the beginning of this activity.

• What are children’s particular needs for protection in your community?

• What people or groups are providing protection for them?

• Are there ways you and your class can contribute to this protection?

• Why do you think that the rights of children needed to be expressed in a special human rights treaty?

The Universal Declaration of Human Rights (UDHR) was written in response to the devastating events of the Second World War. In the Preamble, the Declaration states that “disregard and contempt for human rights have resulted in barbarous acts which have outraged the conscience of mankind” and stresses that “recognition of the inherent dignity and of the equal and inalienable rights of all members of the human family is the foundation of freedom, justice and peace in the world”.

Peace, disarmament, development and human rights are interrelated issues. A comprehensive approach to teaching for human rights is teaching for peace and disarmament, as well as for development and environmental awareness. Information on the arms race and on the attempts to control it could be provided to students. The fact that there have been more than 150 conflicts since the end of the Second World War shows that armed violence continues to be used. Depending on the level of the class, a study of international political and economic issues would also deepen students’ understanding of why peace is so hard to preserve. Developmental imbalances and ecological problems are also endemic; they are not only violent in themselves, but may contribute to sowing the seeds of war. And war – in particular nuclear war – even on a small scale, can result in an environmental catastrophe.

Pick a fine day if possible. Pose the question: “In a world with local conflicts and the threat of war, why do you think peace is important?”

Take the class outside, perhaps, to somewhere pleasant. Everybody lies on their backs without talking and shuts their eyes for approximately three minutes. Resume the class and discuss the fundamental value of peace. How would they define “peace”?

What is the relationship between peace and human rights?

Role-play a summit discussion between the leaders of all countries about a critical issue, for example reduction in the use of land mines or the protection of children from dangerous work. Stage a classroom debate on the topic, with groups working together as the countries involved: some groups trying to ban these practices, some groups refusing to ban. Compare, when feasible, the discussions that led to the Convention on the Prohibition of Anti-Personnel Mines (1997) or the Convention Concerning the Prohibition of the Worst Forms of Child Labour (International Labour Organization’s Convention No. 182, 1999). Emphasize that different countries and people can work together in ways that allow all of us to live together in peace. (UDHR article 28; CRC articles 3, 4, 6)

One of the common results of war and oppression is the creation of refugees, people who flee their home countries because of a “well-founded fear of persecution for reasons of race, religion, nationality, membership in a particular social group or political opinion” (article 1.A.2 of the Convention relating to the Status of Refugees, 1951).

You are a teacher in ___. Your partner disappears and is later found murdered. Your name appears in a newspaper article listing suspected subversives. Later you receive a letter threatening your life because of your alleged political activities. You decide you must flee. Pack your bag. You can take only five categories of things (e.g. toiletries, clothing, photographs) and only what you can carry in one bag by yourself. You have five minutes to make these decisions. Remember that you may never return to your home country again.

Ask several students to read their lists. If they omit the newspaper article or the threatening letter (the only concrete proof to offer authorities in the new country that they are fleeing a “well-grounded fear of persecution”), say “Asylum denied”. After a few such examples, explain the definition of a refugee and the importance of proof of persecution. Discuss the experience of making emotional decisions in a state of anxiety.

Research refugees in the world today:

• Where are the greatest concentrations of refugees?

• Where are they fleeing from and why?

• Who is responsible for caring for them?

In some parts of the world, boys and girls, even younger than ten years old, are recruited to serve as soldiers. Often these children are kidnapped and forced into this dangerous work, which can lead to death, maiming and alienation from their home communities and society as a whole. A new Optional Protocol to the Convention on the Rights of the Child bans the involvement of children in such armed conflict (2000), as does the International Labour Organization’s Convention on the Worst Forms of Child Labour (1999).

• Why would armed forces want to use children in warfare?

• What human rights of these children are being violated? Cite particular articles of the Convention on the Rights of the Child.

• How might being a child soldier affect girls and boys differently?

• If a child manages to survive and return to the home community, what are some difficulties that she or he might face at first? In the short term? In the long term?

Here are some ways in which students can take action or explore the issue further:

• Find out more about child soldiers in different parts of the world;

• Find out what organizations are working to rehabilitate former child soldiers and offer them support;

• Write letters encouraging the Government to ratify the Optional Protocol to the Convention on the Rights of the Child banning the involvement of children in armed conflict.

In many ways, the human rights framework and international humanitarian law reinforce each other. For example, both show particular concern for children recruited as soldiers and recognize the need for special protection for children in situations of armed conflict.

Find out more about how human rights and humanitarian law apply in conditions of warfare:

• Research the history of the International Red Cross and Red Crescent Movement and the Geneva Conventions. How have the original Geneva Conventions of 1949 been adapted to address the conditions of modern warfare?

• Find out about the humanitarian work of the International Committee of the Red Cross (ICRC) for victims of war. Compare the ICRC’s seven fundamental principles (humanity, impartiality, neutrality, independence, voluntary service, unity and universality) with the principles of the Universal Declaration.

• Compare the Optional Protocol to the Convention on the Rights of the Child regarding the involvement of children in armed conflict and article 77 of Additional Protocol I to the Geneva Conventions regarding the recruitment of children. Which is more effective? Are both needed? Do you agree that a person of fifteen is old enough to serve as a soldier?

• Examine news reports of armed conflicts in the world today. Are the Geneva Conventions being observed in this conflict? Is the UDHR being observed?

Designed by Design and Powered by: Eunosmedia.